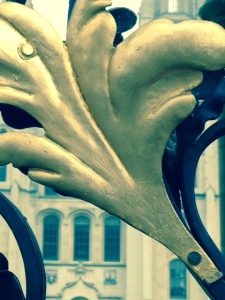 The golden years of crystallographers is being celebrated with their Nobel Peace prize displayed alongside their laboratory equipment to note 100 years of the study of crystals. There is an interesting after life to the initial successes of these scientists. William Bragg was involved War duties when awarded his prize in 1915 and so postponed his lectures until 1922.

Unravelling the lives of other famous scientists reveal further struggles. Dorothy Hodgkin’s laboratory is described as a joyous and productive place, however the Cold War stopped her touring to many overseas academic institutions to lecture on Insulin until she was in her eighties. 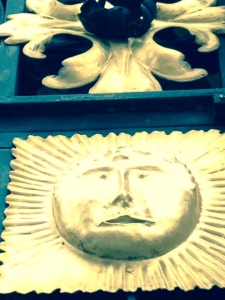 The inspiration to devote a life to marking the position of atoms in crystalline structure shines through brilliantly in the display cabinets. In addition to the benefits offered to mankind, the unstoppable beauty of these natural substances is obvious.  Gold glistens in the Pyrites from Spain and silver shimmers through the opaque Baryte from Wensleydale, taking the attention immediately.

The exhibition shows methodically how equipment changes during the life of a scientist, hence changing their working methods. The manual goniometer, to physically measure angles between crystals, is gradually replaced by the electron microscope. The flow of electrons create map-like images that inspires Art through its geometry. Man-made images emulating the electron micrograph are embroidered onto tablecloths shown both in the exhibition and at the Festival of Britain in 1951.

The scientist’s endeavour offers different opportunities to interpret what we see in front of us. Whilst a model of Watson and Crick’s DNA structure is on show, reference is made to how in the middle ages crystals were seen as having occult properties. With technology speeding up the sequencing technique is completed in days as opposed to months. Today it is the mind of the scientist and not crystal-gazing that leads the way, making everyone’s golden years stretch that little bit further.

Crystals exhibition is on at History of Science Museum Oxford until March 30th.