Looking for an object to fill me with inspiration I walk around (and around) a local covered market and follow the scent of oranges and bright posters to a local museum to see how an object can be used as Art.

‘I’m having Art for lunch’ says a visitor as another orange is taken from the top of a pyramid.  The removal of the orange feels organic as it fits perfectly inside the palm. The negative space of the shape assembled by Roelof Louw is growing as each visitor physically digests the sculpture. Viewers of the work approach the mammoth pyramid that originally has 6,000 oranges with equal measures of awe and excitement.  With the room smelling acidic from the fruit that is slowly decomposing, the viewers around me embrace the concept of deconstructing the work with bold glee.

Louw previously exhibited a show entitled ‘Location’ at Modern Art Oxford in 1969 and was attracted by the space of the large upper gallery.  His work is often defined by the location it interacts with; in the ‘Holland Park’ photographs planks of wood are piled upon dead leaves to find the boundary of where nature ends. His work endures in uniformity as it is made anew somewhere else exactly according to Louw’s original instructions.

Louw’s early sculptures prove seminal because they are made of cheap material and are not placed on a plinth.  Copies of the brochure that accompanied his ‘Location’ exhibition are on show along with his own letters and images of his temporary installations.  The hand-written communications that lead up to his 1969 show reveal touching honesty.  Louw is open about his telephone being disconnected due to lack of funds but offers to purchase the photographic negatives taken of his work.  Full recognition of his talents as a conceptual Artist followed and evidence of his importance lies in this gallery.

The black and white photographs of London’s ‘Park Lane’ (1968) are full of detail and strong composition.  After closer inspection cast-iron wedges are found to be placed along the street, breaking up perfect symmetry and pointing out the areas made by man.  Louw accentuates the barriers between materials that have been newly added, such as pavement to the road.

Depicting the uniformity of the classical architecture of London points out something that is established and ripe to be changed.  The experiment to place the cast-iron wedges can be repeated but the space has changed.  This highlights a duality in the work which although meticulously reproduced, demonstrates how a moment can never be regained and how the passage of time is unstoppable.

Eventually there will be just one solo orange remaining in the pyramid standing proud in the centre of the room and no doubt this too will be somebody else’s Art to be digested for lunch.  A theme of the work appears to be that everything must go.  Taking my orange, from ‘Pyramid (Soul City)’ 1967, and holding it in my hand I am consoled by the fact that we are what we eat. 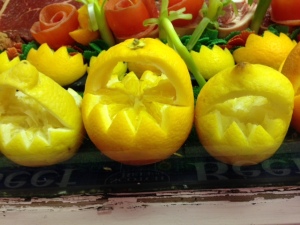 60 thoughts on “Oranges are the only fruit”