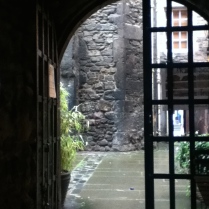 One of the oldest courtyard gardens near to Edinburgh Castle

Greenery on this medieval courtyard is close to Edinburgh Castle

Looking back at my annual August visits to Edinburgh Festival Venue brings alive the stories of a medieval building.

David Hume lived here in 1751 and began writing his philosophical work accompanied by ‘two inferior members – a maid and a cat.’ A landscape by James Norie from this mid 18th century period was painted on a wall panel and discovered during conservation of the site in 1960.

The garden to the South of the building was the only patch of grassland without building on it this close to the castle. This potentially boosted the sales of an Aloe Vera inspired pill sold from a second floor shop opposite the building. These ‘Anderson’s pills’ would be sold from 1690 up to the late 1800’s and were prepared by the Physician of Charles I.

Ground space is still scarce at the top of the Royal Mile. The paths that weave around the Castle are called Wynds because they wind back on themselves. The ground outside Riddle’s Court has historically been overcrowded. The ‘land merchants’ who first traded here commonly sold linen out of canvas booths. This 510 foot length of land inside the city wall was given to the people by David II in 1352 and was known as the lawnmarket due to this custom of it being used for trading.

Originally a squalid building stood on the grounds of Riddle’s Court, this was ripped down to create something new in 1590 when Bailie John McMorran persuaded the city council to let him build his new home here. McMorran began his career as a servant to the Regency and rose to riches later creating royal banquets in his home, attended in 1598 by Duke of Holstein. Kings and Queens have been reported here in eyewitness accounts of the time and the ceiling in the Beam Room is painted with crowned heads, dragons and regal symbols.

For security purposes during medieval times, some of the Wynds had double gates and some are still in place. There are iron rasps on the outside of the front door where a fixed pole is scraped or rasped using metal rings that are attached to get attention and ask for admission to the house.

In 1892 part of the building was destroyed to make way for the airy courtyard still enjoyed today. The staircase on the outside of the building acts as a balcony to the world and connects the first and second floor. It was used for a residence for University students in 1887 when Patrick Geddes repurposed the building and removed the squalor that had grown again in this area. The words above the doorway translate as ‘by living we learn’ and books for University Summer School students were stored here before the advent of public libraries.

This year sees a new chapter in the story. A Fringe venue reopens here. During the 1950’s, in the early days of the Edinburgh Festival Maggie Smith performed at Riddle’s Court. The building was first used as a theatre in the early 1900’s. Currently a new play ‘Broken Dolls’ tells the heart breaking contemporary tale of trafficking.

Standing on the courtyard looking out as the military bands who performed at the Tattoo wander down from the Castle the history of the building is alive. The mix of people gathering here for very different purposes is celebrated out on the cobbles as much as it is within the panelled walls where an Oscar Wilde story is portrayed through a musical in ‘Much Ado About Muffins’.

A modern ‘Romeo and Juliet’ set around a BBQ in urban London is staged here this month. Making eye contact with a costumed actor near the entrance reignites a moment from the past and the stories of the building unfold all over again. 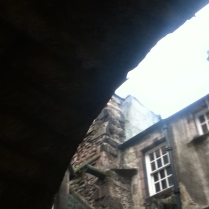 Linking and upper floor to the first floor at Riddles Court

Windows look out onto the medieval Royal Mile

Other memoirs from other writers are found here and below

Catherine Zhang Cutting Someone Off Feels Like Drowning A Puppy

One Man Versus the World One Man’s Salvation

…Of Course, this Could All Go Horribly Awry Why I’m Not a Concert Pianist (Weekly Writing Challenge)

Sunshine Witch Memoir Madness – It was the best of times

Beyond the Brush I digress …

risingrave28 Fragments of A Snowy Weather

My Journey to Find Me The Challenge

Rêveries of an Imagination Junkie Memoir Madness: A Frugal Farewell

Among the Whispers Daddy and Me: A Mermoir

Musings of a Random Mind a rite of passage

A Little Fluff Memoir Madness – Why I Adored My Father

Aisha’s Oasis Ep. 16, Joyride To Egypt: Like A Runaway Train

The truth was written on my wrist. Remember who you are

Confessions of A JazzyBelle An ode to my damn self

Mirrorgirl The sound of these years across my face

Jill’s Scene How flat can a valley be?

Memoirs of a husk Why I spit in the eye of wedding anniversaries. A true story (with the best bit at the end).

Damsel in a Dress Writing Illness as Humour

Rachel’s Rambles What It Means To Lose A Friend

Stuff my dog taught me Nostalgia is a Siren’s Song

My Own Champion Summer Beckoned

Inside the Mind of Isadora Egg Cream – Please

Shadows The Realistic Fiction – A Memoir

A Whirlwind of Thoughts and ETC Autumn Is

A Blog’s Life The Forgotten

The Daily Blabber It Was The Worse Day Ever

Guide to Getting Lost The one where you fall in love.

The Passion Dew The Muse of Love

The Seeker The Power of One

Finale to an Entrance The Six Dollar Men

The Day After Polka Dotted Friends

erraticpandemonium Stillness: Living Around You

Memoirs of a Mild Melodramatic Caught In A Web

In my world Writing 101:God, the serial killer that never gets caught (part 3)

A Guide to Getting Lost The one about the roadtrip

Just A Thought One Good Memory

Coded Transmissions Hey, College Roommate, This Is For You Chiquitita WWC: MEMOIR MADNESS

My Infernal Imagination I remember

Following My Joy My Grandmother, Her Funeral and One Missing Button

True Stories Reflection on the Beatles’ Arrival in 1964

Emovere A Moment of Happiness

I Am Woman Desert Dreaming

Victim to Charm I Remember

Musings From My Id Memoir Madness

Ramisa the Authoress I Remember the Falling Rain

The Frozen Tears I Remember…

21 thoughts on “Court fixing up the past”