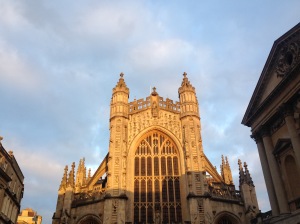 On walking into Bath Abbey the light that floods in from the many windows is striking. 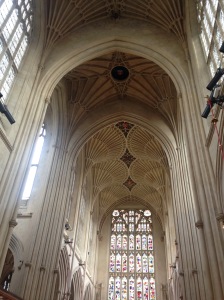 The stained glass window behind the altar has 56 panels each telling a story of the life of Christ.  During World War II (in 1942) this was smashed during a bombing raid.  Thankfully most of the glass was saved and plans of the design of the window were found.  After the war ended the window was restored to the beauty we see today.

On a sunny day the light that shines through the coloured glass gives the Abbey a nickname of being a lantern.

The ceiling over the altar of the Abbey of Bath was carved in situ by French architects (the Vertue brothers) in the 17th century.  The second half of the ceiling closer the entrance was carved later when funds were available to restore the whole roof.

The Abbey is an active church, serving the parishioners of Bath.  Originally the site was occupied by a Norman Abbey which was half as big again as the huge building that exists today.  Ruins from the foundation of the Norman Abbey are seen under a glass floor panel.

The walls are lined with memorial plaques (US Senator William Bingham is remembered here) and over 4000 bodies are buried under the Abbey.  Later a cemetery was assigned for the deceased.

The monastic community originally housed here would have tended gardens.  Now the closest major garden to the Abbey is the botanic garden which also has a lively duck pond.

The Gardens at Bath are separated by a road which leads via the gate to a modern area called the Dell.

Bath Botanic Garden is close to the Royal Crescent buildings and was created in Victorian times.

These photographs were taken whilst quiet prayer was being conducted.  Much caution was also taken to record the images of the garden as ducks from the central pond in the garden were busy fighting for their territory.  The caution necessary made the red pop brighter to the eye as there was a short moment to grab a photograph.

The visit was all the richer for me not knowing such a beautiful garden could be found in Bath.  I had a spare hour and I followed the sign past an old restored bandstand to the garden.  Preparations were under way for a half marathon race to be run through here for the weekend so I proceeded with caution!

Other botanic gardens of Britain are featured in my illustrated guide book here  if this is of interest please enjoy a free copy here.

24 thoughts on “Bath Gardens and Abbey”