Outsized heads stand up as characters. Gender fluid perceptions result from the clean outlines of features of Nicolas Party’s work. Inspired by Japanese Noh masks and Egyptian Sarcophagi the faces project a bold expression. The eyes are open and seemingly absorb the room in this exhibition of ‘Speakers’.

The former graffiti artist Nicolas Party has created a 2 hour soundscape that plays on a loop. This interactive experience verges on theatrical as the visitor is immersed in the extremes of being female. The work is a response to the masculine architecture and institutions of Oxford, particularly the Emperors’ Heads outside the Sheldonian Theatre. 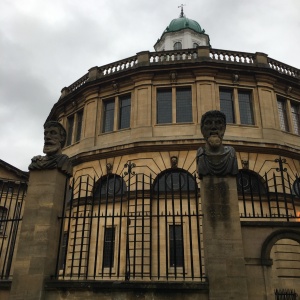 These stone heads on the railings are thought to be crafted in the likeness of notable pillars of society from the 17th century. Party’s approach is different. These are not real people although they magnetise a full personality from their made up faces. Perhaps these women embody the dreams and achievements of the female body.

The gallery walls are orange and the space feels welcoming. Party uses it to bring a new way of looking at a city that has its style set in stone.

The heads on display are painted in situ in the gallery and use expressions of feminine identity e.g. hair styles and make up that the Artist believes viewers use to define gender. The stone heads outside the Sheldonian Theatre look decidedly male with their beards. But then, who knows?

Inspired by this exhibition I checked out some busts of stars of the stage and the page in London’s Portrait Gallery. 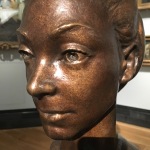 As this Art from ascends from one inspiration to another..

If this review has been of interest.. there’s more in my new book  here