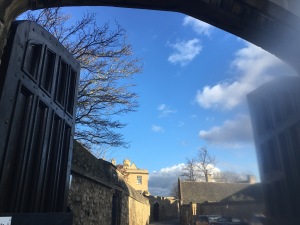 Walking past Christ Church with the sun bouncing off the stone made me become an instant  tourist and find out more about the stories inside the building.  The architecture maybe familiar from the Harry Potter films and TV show ‘Morse’.  The college is where many medieval stories are staged and a review of ‘Murder in the Cathedral’ is posted below.  The Cathedral which is found inside the college is also home to the story of Oxford’s patron Saint Frideswide.  Oxford’s own love story is set around it’s patron Saint, which makes fascinating reading.  As a work of Architectural Art, the Cathedral opens up this real life story set around the Augustinian Priory that stood on the site earlier. 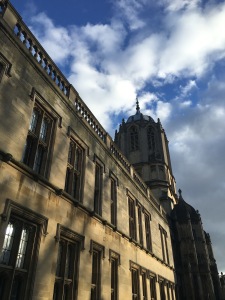 There are many versions of the legend of Frideswide.   When her father, a Mercian King, would not let her marry the man she loved she escaped to ditch a suitor he had introduced her to.  King Algar had been promised her hand in marriage and chased after her on horseback but the people of Oxford will not tell him where she is.  Locals keep Frideswides whereabouts a secret and during his pursuit, the spurned lover, King Algar, falls off his horse.  He is stranded outside the city gates with a broken neck. 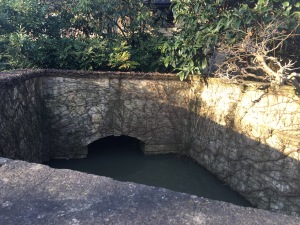 Frideswide hid in Binsey Wood near a well and then sought refuge on the land where the altar that is now part of Christ Church stands today.

The old story of Saint Frideswide makes way for new tales now to be told and the grounds are used for site specific Theatre to be produced occasionally and a review of the space giving life to a fresh story is listed below.

Stories unfold along every tiny corner of the college, after all this is the building that inspired ‘Alice in Wonderland’ written by the college Maths tutor Charles Dodgson who used the pen name of Lewis Carroll to publish his works under. 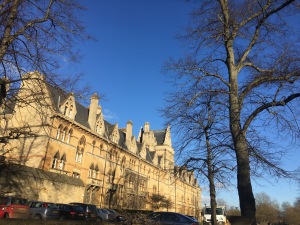 The inspiring gardens are also testimony to the faith and determination of people through the ages.  A memorial garden to those lost in the war line the visitor’s entrance to Christ Church.

Saint Frideswide lived out her life here first as a nun and later an Abbess in devotion to her faith.

Unfortunately a fire destroyed the original priory in 1002 during the St Brice’s day Massacre and the nuns would have been displaced. So it is hard to match the legend of Frideswide to historic fact as it goes back to anglo Saxon times and is only as good as the records that survived.

Saint Frideswides feast day is celebrated on October 19th, the day she is thought to have died.  She is remembered as the patron Saint not only of the city but of Oxford University too.  Cambridge University similarly has a female patron Saint – Ethelred.

Her name runs through Oxford city with a square named after her where modern romances ignite over dates watching live bands and dance events.  Outdoor theatre uses the space and new stories are told.

Frideswide became the Abbess of the Priory that she established and hopefully she would celebrate the new found expression of joy in the city that celebrates her name.

The Cathedral is found in the background of this image and recently hosted an amazing theatrical event that lives on in the memory of locals showing how site specific art brings historic story telling to life.

Part of the action of the site specific event ‘Murder in the Cathedral’ took place from the main Quad show below.  A blow by blow review follows. 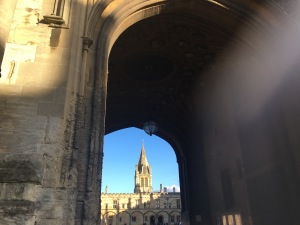 Review of Murder in the Cathedral –

As I type I am seeing ghosts in the window staring back at me hours after this potently visual staging of ‘Murder in the Cathedral’ has ended. The theatricality of Norman warriors in clanging chain mail baying for Becket’s blood up and down the aisles and emerging from the shadows of the Nave is so seductive I find myself smiling with glee as the soldiers storm through church doors hunting for Becket. The atmosphere is electric. No one knows what is going to happen next even though the clue is in the title.

The cast continually make new shapes around the floor of this cross shaped church using neck-breaking high balconies for powerful speeches delivered by haunting characters that transfix this audience. For an intimate experience to dominate such a vast daunting monolith of a Cathedral is an incredible experience making this my favourite theatre event of the year. Escalating hysteria marks out an unsafe situation inside the church effortlessly through Tom Littler’s visionary direction. The Women of Canterbury, played with beautiful sensitivity by a chorus of Oxford University Undergraduates, sing T S Eliot’s poetry whilst sweeping the floors, lighting the candles and dusting the carvings around the audience making each action up close and personal. A virtuoso orchestra of fourteen notches up the fear with every shift of pitch inside David Allen’s deceptively simple compositions.

Inside the Cathedral stands Archbishop Becket returned from the safety of France ready to face the wrath of King Henry II. Becket insists on excommunicating the King’s friends from his church as Becket’s faith is palpably strong. Sympathetic to his beliefs, Becket holds the perfect pinch of arrogance to keep us transfixed thanks to Timothy Allsop’s intuitive acting. Did Becket sacrifice himself for his beliefs or was he cold bloodedly slaughtered is the question starting the conversations during the interval drinks? This ambiguity of purpose reminds me of the shadows in a Caravaggio painting which can be interpreted as either physical or emotional. Caravaggio fills large canvasses with a composition that asks one personal question by using broad strokes as this production does. To take on this vast Cathedral space and fill it with one question that has no easy answer takes the guts and boldness of genius. It is to the Oxford Playhouse’s credit that the cast and crew are too numerous to comfortably mention here as this production marks an exciting raft of opportunities being extended to Oxford University students to gain experience alongside industry professionals. The fine ensemble work crucially leaves no easy middle ground for the audience to stand on. The clarity of the production forces the viewer to form an opinion on the role of the tempters in Becket’s assassination. This is aided by a sharply pitched apologia from the King’s henchmen who return after the dirty deed wearing shiny designer threads that shake some terrific humour out of the hypocrisy. Oddly enough in spite of the violent and bloody ending that visibly stays with me now I am inclined not to give up on faith. The apologia doesn’t wash with me boys. Nice suits but I think Becket was pushed!

Yours truly wrapped up warm in the Winter sunshine where Saint Frideswide found her first taste of safety.