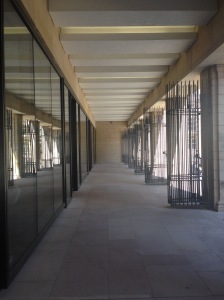 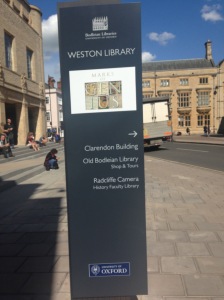 Oxford publisher Basil Blackwell was known as the ‘Gaffer’ and has his personal library on display near a featured exhibition of books curated by Sir Thomas Bodley in the Bodleian library. Bodley founded the library that is showing off some brand new architecture that envelops the outside.

The new additions to the Bodleian library is designed around the historic stone in perfect pieces that are tasteful, impressive and understated but so structurally sound it fuses gently with the old stone work and continues to tell the stories held in the exhibition of books curated by Bodley.

Walking past Blackwell’s first bookshop on Broad Street is a good way to approach the library and enjoy the compact exhibit is dedicated to the book shop founder and enjoy the glass and chrome face lift. The new lets the past speak up for itself.

Some of the star pieces on display include oldest book both associated with Alfred the Great (890-897) and in the English language.  This echoes the scope of the book on display as a mass of important documents. The translation of Pope Gregory I ‘Pastoral Care’ was commissioned by Alfred determined to restore English learning.

The exhibition shows how every book has a story as to how they are made. The degree to which the author was involved in producing the work shows their connection of the genius of their idea and how they most wanted to manifest it. For example, William Blake devised a unique form of etching in relief on copper. This allowed him to arrange his text and images on the same plate in complex compositions to produce the illustrated poetry book ‘Songs of Innocence and of Experience’. The book coined the phrase ‘Dark Satanic Mills’ of the Industrial Revolution.

Franz Kafka reflects on genius in his own words in a 1913 journal from Prague. It is opened at the pages where Kafka’s introspective entry on the concept of genius shows how we pull our inner most thoughts out into consciousness.

Other exhibits result from the gift of collaborators who have got a vision into the public eye. Thanks to support given from the Radcliffe Library John James Audubon captured the birds of America for all to enjoy on paper. As a result of the benefactor Audubon’s genius produces a gigantic book that dates from Audubon’s visit to Oxford in 1828.

‘Marks of Genius’ is also a celebration of firsts. Biologist Robert Hooke draws the first images of items such as a peacock’s feather and a bee sting as seen under the microscope. His publication ‘Microscopia’ is opened at the eye of a fly showing original drawings from the 17th century.

Nature is depicted with wider imagination in the medieval ‘Ashmole Bestiary’ where allegorical illustrations of over 100 animals are illuminated with gold like so many of the books on display, The Griffin, Dragon and Phoenix all feature in the display.

Botanist John Sibthorp surveyed the plants of Greece in the late 18th century and on his death left an endowment to ensure his findings were published. His collection of work is seen in ‘Flora Graeca’, compiled by expert botanists of the day. This process took nearly 40 years. The resilient support of these great minds enabled Sibthorp’s work to enter our consciousness today.

Each exhibit in the ‘Marks of Genius’ exhibition shows the importance of imagination as fuel to and end product that may have looked unlikely at the start. The pages of the books now show immortal blue prints that still guides hundreds of generations far beyond the initial scope of the book.

William Henry Fox Talbot experimented with photography’s ability to reproduce different kinds of object in ‘Pencil of Nature’. Items are made bigger and smaller in his work that challenges the limitations of printing at the time.  German Artist Albrecht Durer who pushed the limits of etching in creating his woodprints celebrated a similar technological breakthrough. 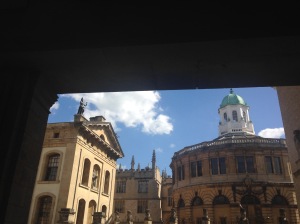 The world of the imagination is uncompromised throughout the display and this inspires us to know what can be achieved when we simply put a pen to paper.   An unpublished draft of a Jane Austen novel entitled ‘The Watsons’ is held in the folded manuscript she wrote by hand.  The possibilities of the unfinished story fires the readers curiosity to this day.

How genius lives beyond a publication and is carried in the reader’s imagination is shown in the 1217 version of the Magna Carta on display. Parts of this agreement between King John and British Barons over land ownership and civil rights exist to the present day in the UK legal system.

There are many stories specific to Oxford within the collection. Handel’s original conducting score of Messiah dated 1741, is positioned in a cabinet opposite the Sheldonian where he debuted his oratorio ‘Athalia’. Dorothy Hodgkin studied Chemistry at Somerville College a short walk away and later coded the insulin molecule, noting the details by hand. Her scientific masterpiece is housed in the library along with the telegram that announced her Nobel Prize success.

When the sun sets on this fine exhibition I will remember forever the small pieces of Sappho’s poetry, fragments that have been pieced together to recreate the magnificent past through restoring, curating and being the caretaker of books. It’s great to look back on the exhibition and think this is what we have done as a nation to curate the past. Marks of genius come from the hand 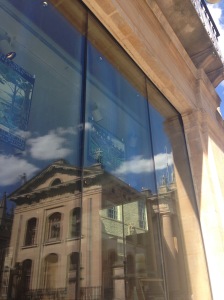 Sapphic fragments of love in the library

and a hot date cools

and crowns for kings.

Amongst them I’m disturbed.

‘you may be free of every care

but you haven’t been told to chop off your hair.’

I dodge the big gob

who has started her new job.

we sink to find our soft centre.

the coffee is on hold

on shields of rust

there is no free wifi

on a parking token.

the man who waits.

He hands her a book

and offers a look;

whilst suppressing his rage.

Break ups are a part of life

but she can’t let this one slide

because things we hold so precious

are too easily taken from us.

YOU STOLE MY DREAMS

to tear a handwritten sheet.

and fallen on the floor.

that had formed inside her

they can hold a past

so that it will last.

if she had all the riches in town

she could not  make him turn around

in spite of it all.

They had a plan

but there was another man.

They cleave to their strengths

but it’s hard to find that when your hair has no length.

Time to find a new chapter

because new love has started inside her. 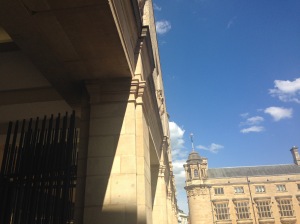 Further posts inspired by the theme enveloped can be found here

36 thoughts on “Display of Genius at Bodleian Library”